the story of a dumpling: today, I wanted to share with you what it looks like to make dumplings, from start to finish. while the video itself is only less than a minute, each one of our dumpling days takes almost half a day (though to be fair, we make a couple hundred.) to us, making dumplings is a way for our family to connect with each other and with our roots as well as a hearty meal for all. each dumpling is distinct from the other, and we each have our own unique styles. this is the true story of a dumpling, as told from the Zhang family. Hope you enjoy!
crunchy on the outside and chewy on the inside: sharing one my latest and absolutely simple and delicious recipes that I discovered -- Brazilian cheese balls. we discovered them first after visiting a Brazilian steakhouse, where these were served as complimentary sides and I first fell in love. all it is is tapioca flour, milk, cheese, an egg and a bit of salt. and all you do is mix everything together and bake -- literally the easiest crowd pleaser and finger food to make. check the full recipe in our highlights!
haven't left the home for 8 days now, and today's one of those days where we're really craving these bananas foster beignets with cane syrup and nutmeg ice cream from @saltysow. but while we can't dine out, there are so many local restaurants offering take out, and in times like these, it's the least we can do to support our local businesses. head over to @eateraustin, who have helped to compile an extremely useful list of the businesses that are offering take out or delivery. let's continue eating good food & supporting these amazing places!
the little brother turned 17 today, so we celebrated by making the famous brown butter buttermilk cake from the one and only @alisoneroman. not too difficult at all, and a family favourite! check out the story highlight for the behind the scenes -- as well as what to do when you don't have buttermilk but don't want to go to the grocery store bc they're diligently practicing social distancing.
finally tried out @dipdipdiptatsu_ya the other day: a Japanese shabu shabu restaurant. what's shabu shabu you ask? its name is derived from the swishing sound you hear when you stir and cook ingredients in a hotpot. here, you've got your own customized hotpot with whatever type of ingredients you choose (and there's quite a lot) alongside dips of your choice (get the truffle dip!) it's definitely an experience of a lifetime.
still dreaming about this shrimp capellini with ricotta, caper and lemon from @oliveandjuneatx perfectly creamy and dreamy -- this dish is bound to end your day on a high note and leave you feeling wonderfully satisfied.
we found a new restaurant called @tentenatx -- a modern Japanese restaurant with a wide variety of shareable and fun dishes. we stopped by for happy hour and had an absolute blast! pictured here is the premium nigiri toro, with nikiri and caviar.
first time having Chicago - style pizza. for someone who loves cheese, the stuffing was definitely a huge attraction. just look at that cheese pull 😍 what is your favorite type of pizza?
my favorite antipasta (no matter where) is arancini: here, @oliveandjuneatx, the arancini Verde with roasted tomato aioli, taleggio, and parmesan is a must get appetizer to start off your meal.
Skip to content
Press Enter / Return to begin your search.

First things first: HAPPY HOLIDAYS TO ALL YOU LOVELY PEOPLE IN THE WORLD! Hope it is an amazing one for both you and your family!

And on to the rest of today’s post… FOOD AGAIN, because why not?

Fortunately for me (and unfortunately for my credit card), my dorm back in Austin is one block away from The Drag, which is a nickname for a portion of Guadalupe Street that runs along the western edge of the University of Texas campus in Austin, Texas, as the lovely Wikipedia will tell you.
The Drag began as a strip of shops which provided vital resources to UT students. There, you can find bookstores for textbooks & school supplies, small boutiques (but really, do you think college students can afford a $47 tank top? I certainly can’t…) and best of all, A TON OF FOOD VENDORS!

So why again is it bad for my credit card? Because I now have a shit ton of money left from my campus meal plan and not enough on my card. But the food on The Drag is so incredibly good, and so is the food scene in Austin, so if you ever stop by Austin, you too should try these lovely lil’ places around the city!

First up is Kismet. Kismet used to be located literally three minutes away from my dorm, but moved to a different location recently. 😦 Not sure where they are now, but if you ever find them, definitely try out their P17, the Creamy Jalapeno Meat over Rice. Next is K-Bop, a Korean restaurant on the North side of The Drag. I went just once with a group of friends and got the Bibimbap, and though my photo does not do it justice, I would also recommend you try this one if you’re a fan of Korean food. Madam Mam’s Thai Cuisine is also about three minutes away from me, and their Bankrupt Noodles is a spicier and yummier version (if that’s possible) of the beloved Pad Thai. Right next to Madam Mam’s is Vert’s Mediterranean Grill, where they have some A-M-A-Z-I-N-G falafels and their Tzatziki Sauce can go ahead and kill me now with its deliciousness.

Austin is also home to some of the best food trucks in the world (or I’d like to think). Don’s Japanese Food Truck is both cheap ($5 for a box? Hell yeah) and delicious, so if you go during lunch, expect about a 40 minute wait under the sun. Julie’s Noodles serves some pretty good Egg Chow Mein and the Pot Stickers are comparable to those from home, so if Chinese food is your thing, then Julie’s Noodles should also be your thing.

Further away from campus we have 24 Diner. Austin is literally the city of brunch (Kerbey, Vinaigrette, diners on essentially every street). My friend and I went out one Saturday morning (and after a thirty minute wait, which is exceptionally good), we both tried the infamous Chicken & Waffles. And though I thought it would be terrible (just doesn’t sound like a particularly appealing combination), I have found my new favorite brunch item. IT’S SO GOOD. AHH.

And for honorable mention, we have College Station’s (my hometown, home of the Fightin’ Texas Aggies, the George Bush Library and nothing else) very own First Watch. After coming back for break, I caught up with my friends over lunch at First Watch, which recently opened in the summer (so not really recently…) Anyways, they have some pretty good brunch items, but as it was already 1:30 p.m., we settled for the lunch special, which I got the Monterey Club sandwich and the Chicken Avocado Chopped Salad. First Watch really reminds me of the some of the Austin-area brunch places, and it’s pretty cute, so if you ever stop by C-Stat (but IDK why anyone would unless 1) you go to A&M or 2) you have family there/live there or 3) you want to visit me), make sure you stop by First Watch!

Note: So I’m really bad at remembering to take pictures before I eat (because by the time the food gets here, I’m starving and certainly not thinking of my blog or photos. Sorry, blog.) Anyways, I’ll try to remember from now on, so in another five months or so, there’ll definitely be a Semester Two of WTF (Where’s the Food)!

More Chicken & Waffles because they were so good 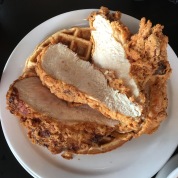